CRISTIANO RONALDO is a “special player to work with” according to Manchester United teammate Anthony Elanga.

20-year-old Elanga has experienced a breakthrough this year.

So far this season he has made 24 first team appearances, scoring three goals and assisting two.

Now he has revealed that Ronaldo helped him settle into Premier League life.

In an interview for the official Man Utd website, Elanga said: “You can see his record and the amount of goals he’s scored.

“He know what it takes to get to the top so it’s more than right to just speak to someone like that. 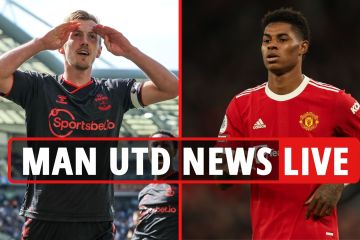 “And yeah, we have a chat the day before or even during a game. You might see us in the warm-up.

“He’ll speak to me and Sancho together about what we can do in the game, to affect the games – and it’s important to have someone like that in the team.

“He is someone I look up to and speak to and ask for advice and stuff. He is a special player to work with.”

Ronaldo has been one of United’s top performing players this season.

In 36 appearances he has scored 23 goals.

He has also been named Man Utd’s player of the month three times.

However, he has been criticised by many for having a ‘bad influence’ on the club.

The five-time Ballon d’Or winner has recently been linked with a move back to Real Madrid.

Earlier this year, SunSport reported that he could quit Man Utd if the club do not earn a place in the Champions League.

And with the Red Devils struggling in sixth, it is looking unlikely.

Man Utd ‘could land’ striker amid battle for free star