ARSENAL and Manchester United look set to be priced out of a move to sign Victor Osimhen with Napoli demanding a whopping £83million.

The Nigerian striker has been linked with a move away from Naples in the summer following another impressive season.

After scoring ten goals in his opening campaign in Italy, the 23-year-old has chipped in with 15 goals and four assists in 25 games in all competitions this term.

Arsenal are in the hunt for a new centre-forward after allowing Pierre-Emerick Aubameyang to join Barcelona in the winter transfer window.

Meanwhile Alexandre Lacazette and Eddie Nketiah are set to depart when their contracts expire at the end of the season.

And the Red Devils are in the market with Cristiano Ronaldo, Marcus Rashford and Anthony Martial all facing uncertain futures. 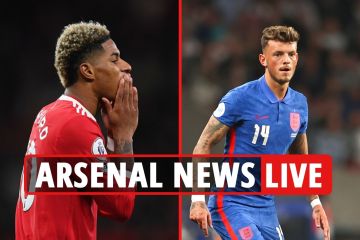 Uruguay international Edinson Cavani will also depart on a free transfer as he edges closer to linking up with LaLiga outfit Real Sociedad.

According to Corriere dello Sport via Fichajes, both Arsenal and United are keen on securing the ex-Lille ace’s services.

It has also been said that the likes of Tottenham, Liverpool, Newcastle and Real Madrid have also shown interest in recent months.

But a move this summer appears unlikely with Napoli demanding £83m in order to part ways with the player.

The Italian news outlet adds that negotiations would be difficult with Napoli president Aurelio De Laurentiis, who is known for driving a hard bargain.

Arsenal could now turn their attention to landing Darwin Nunez from Benfica.

Mikel Arteta’s side have reportedly held talks with Nunez’s agent over a possible swoop.

Should Osimhen be deemed as too expensive for United, they could look to bring Roma marksman Tammy Abraham back to the Premier League.