The nickname means “the Bug” in Spanish and Lisandro Martinez recently used it when commenting on one of Ronaldo’s Instagram posts.

However, the 37-year-old being called this dates back long before he returned for a second spell at Old Trafford.

GOAL claim the nickname originates from his Real Madrid playing days where Spanish commentator Manolo Lama dubbed him “El Bicho” on the radio when covering one of his early LaLiga matches.

It is thought Lama called Ronaldo this because of his frightening skill and that defenders were like his prey and he could devour them.

When at Real Madrid his style of play was a lot different to the poacher type striker we see now. 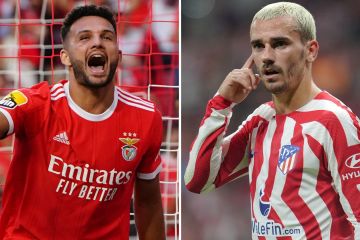 The Portuguese legend arrived at the Santiago Bernabeu as a goalscoring winger with unbelievable acceleration and dribbling ability.

Plus he was known for his skills with his quick step-overs and the “Ronaldo chop” as well as his ability to unleash powerful shots.

El Bicho may be what he is called by the Man Utd team but his more prominent nickname is CR7 – which the five-time Champions League winner built his brand on.

Fans have also called him Mr Champions League but Ronaldo is now playing in the Europa League with United after a transfer away didn’t materialise.

He netted his first goal of the season from the penalty spot versus Sheriff in the group stage of the European competition.

The strike ended his longest goal drought for 16 years.

Ronaldo has started just three matches in all competitions since Erik ten Hag took over as United manager.