The 37-year-old superstar seemed to be in good spirits at the club’s Carrington base amid his uncertain future.

And despite it being early May, the Portuguese icon decided to don gloves for the training session.

Ronaldo was on the scoresheet in Monday’s 3-0 win over Brentford – his 24th goal of the season.

But the final two games of the Premier League season could end up being his last for the club.

SunSport exclusively revealed earlier today that Manchester United are facing a battle to hold on to Ronaldo this summer. 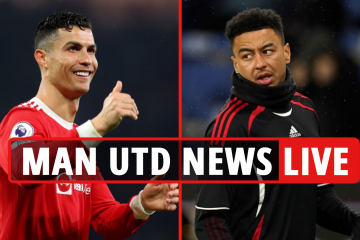 CR7 is considering a move away just a year after penning a sensational return to Old Trafford.

Although much is expected to come down to what incoming boss Erik ten Hag plans to do with Ronaldo when he arrives in the summer.

An exit would mean Ronaldo has already played his last game at Old Trafford, with United’s two remaining fixtures both being away from home.

Ronaldo still has one season left on the two-year deal he signed when joining the club from Juventus last summer but his future is far from guaranteed.

Although after the game interim gaffer Ralf Rangnick said: “I don’t think why it should be a wave of goodbye.

“He’s got another year of [his] contract. And as far as I know he will be here next season again.”

Chants of “Viva Ronaldo” echoed around the Theatre of Dreams as Rangnick’s players embarked on a lap of honour after beating the Bees.

Ronaldo seemed to say “I’m not finished” to the TV camera following him around the pitch.

But he later denied making the statement, writing on social media: “I didn’t say that.”