CRISTIANO RONALDO will continue to play for Manchester United next season, according to reports.

The five-time Ballon d’Or winner is set to see out the final year of his contract at Old Trafford, even if the Red Devils are not in the Champions League.

According to Spanish outlet AS, Ronaldo is confident that the right managerial replacement will be appointed when Ralf Rangnick leaves the club at the end of the season.

Various big names have been linked to the job, including PSG boss Mauricio Pochettino.

Erik ten Hag is also interested, and has even been taking English lessons in a bid to be selected by club chiefs.

Thomas Tuchel is another name that has been mentioned – he could make a move to Manchester in the wake of Chelsea’s current crisis. 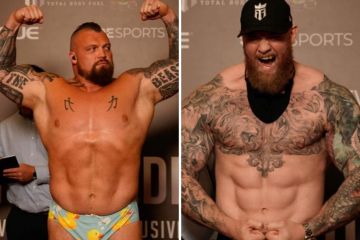 Ronaldo has made it clear that he wants to compete to win the Premier League and the Champions League with Man Utd.

The 37-year-old has been in fine form since rejoining the club last year, scoring 18 goals in 32 appearances.

However, it has been suggested that he is a ‘problem’ in the dressing room.

Reports last month stated that a rift was emerging between him and teammate Harry Maguire.

The pair were reportedly feuding about who deserved the captains armband.

Maguire was quick to dismiss the claims and said: “We are united and focussed.”

Anthony Martial also came to Ronaldo’s defence, and claimed that all reports were false.

The Frenchman said: “Cristiano is a top professional, one of the best in the history of the game.

“We all love him. There are things that are said in the media that are not true.

“I was in that dressing room and I know what happened.”

Man Utd are currently fighting for a place in the top four, but face a tough battle with the likes of Arsenal, West Ham and Tottenham.