There’s no way around it, Cristiano Ronaldo is a footballing and Manchester United legend.

Soon to be officially the highest ever goalscorer in men’s senior football, the Portuguese star has won it all (apart from the World Cup) and seen the lot.

Five Champions Leagues, a European champion with Portugal and a winner of both leagues and cups in England, Spain and Italy; he will go down as one of the most decorated and finest players of all time.

But his long-awaited move back to Manchester United in the summer has not been the dream-like return that he, the club and the fans would have imagined.

The team’s poor form saw Ole Gunnar Solskjaer sacked, with the side now fighting for a spot in the top four rather than challenging for the title.

You can look at stats and argue whether it was the right decision all you want, but we all know the most accurate (or at least the most fun) way of testing something is to use Football Manager.

So we’ve decided to simulate what would happen if Ronaldo stayed at Juventus for 2021-22 using Football Manager 2022.

All United’s other transfers have gone through as they did in real life, and we’ve put Solskjaer back at the wheel to see if he keeps his job with Ronaldo not at the club.

With Ronaldo not arriving, United would surely need to sign a striker, right?

Well, according to the Solskjaer of the FM world they were fine for attacking options.

The only other transfer the Red Devils made in the summer was… signing Paulinho as a free agent. Hey, at least it’s a midfielder.

When January rolled around the club had seemingly come to the realisation they did need to invest in new players, but they won’t have been the ones you would have expected.

Firstly Eziquel Barco arrived from Atalanta United for around £20million to provide another attacking option as back-up to Bruno Fernandes behind the striker or as a winger.

An interesting choice, but at 22 the Argentine proved solid rotation for the rest of the season and notched up two Premier League assists from two starts, while primarily being used as a substitute.

The club clearly had a taste for Argentines because their other transfer was for Julian Alvarez, the River Plate prospect who has moved to Manchester City in real life.

Unlike the City deal, however, United opted to bring the wonderkid straight to Manchester rather than letting him stay in Buenos Aires.

It proved a good decision, the striker scoring three and assisting twice in 13 starts. 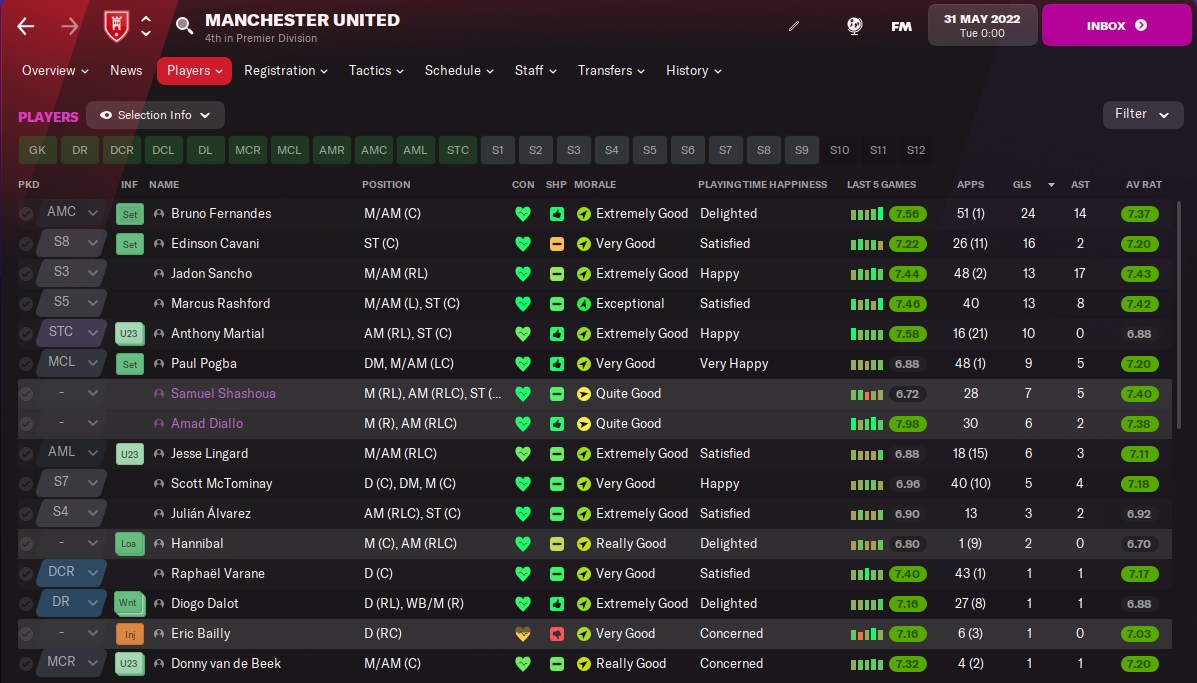 With no Ronaldo, Martial was unsurprisingly not allowed to leave on loan in January and shared the job of leading the line with Edinson Cavani.

The Uruguayan was preferred to the Frenchman and scored 16 goals compared to Martial’s 10, but it was Fernandes playing behind the striker who would be United’s top goalscorer for the season with 24 goals and 14 assists.

He was flanked by Marcus Rashford to the left and Jadon Sancho to the right, the latter scoring 13 times and assisting 17 in an impressive debut season.

It was Paul Pogba and Scott McTominay who sat behind Fernandes, with Pogba opting to renew his deal before the end of the season.

Jesse Lingard also had an increased role in the side, starting 18 games and having nine goal contributions in all competitions. He also extended his stay at Old Trafford.

Dean Henderson was preferred in the net (something that always seems to happen with United in FM22) while the back four was as expected, with Harry Maguire and Raphael Varane flanked by Luke Shaw and Aaron Wan-Bissaka. 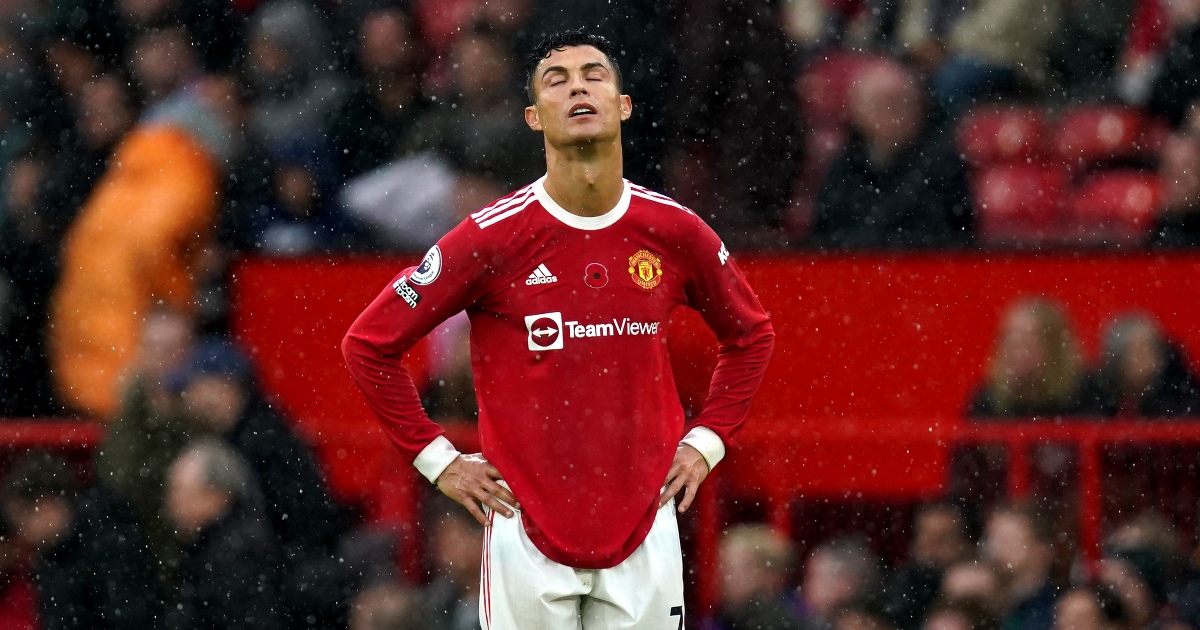 READ: The Cristiano Ronaldo debate: Is he the problem at Manchester United?

So without Ronaldo did United experience all the joy and success imagined?

Before the end of January, United found themselves fifth, four points adrift of Arsenal in fourth. Solskjaer’s job was seriously under threat, and it looked as if no Ronaldo at the club simply delayed the inevitable.

But by the end of the year, perhaps rejuvenated by the new signings, United managed to sneak into fourth place, finishing four points clear of Arsenal with 72 points but some way off champions Liverpool.

It was Liverpool that dumped United unceremonially out of the FA Cup on penalties in the fourth round, and their struggle with penalties continued when they were embarrassingly knocked out of the Champions League in the first knockout round by Atalanta (the groups were different than in real life).

But there was silverware for Solskjaer and co, with the Ronaldo-less side lifting the League Cup.

After a thrilling 2-2 final, United ended up beating City on penalties with youngster Hannibal Mejbri bagging the decisive pen.

That, and top four, meant Solskjaer survived the season.

But what of Ronaldo?

Well, the No.7 ended up not leaving Turin and fired them back to the Serie A title as top goalscorer.

They ended up as double winners too, beating Sassuolo in the Coppa Italia Final, but couldn’t make it past fellow Italian side Atalanta in the quarter-finals of the Champions League.

Gian Piero Gasperini’s Atalanta – the subplot you’re definitely still here for – only lost by one goal to eventual winners Real Madrid in the semis.

Can you name Man Utd’s XI from Cristiano Ronaldo’s debut in 2003?