FRENKIE DE JONG has revealed he NEVER wanted to join Manchester United in the summer despite his future at Barcelona being up in the air at the time.

The Dutchman, 25, was at odds with Barca in the summer over millions in wages still owed to him.

De Jong was slapped with an ultimatum to either leave or take a major pay cut.

And so a deal between United and Barca for the midfielder, which would see him reunite with old Ajax boss Erik ten Hag, worth £72million was agreed.

But despite the financial dispute, Barca and De Jong repaired the damage to the relationship – something the player wanted all along.

De Jong, who is away on international duty with Holland, opened up on a possible move in a press conference. 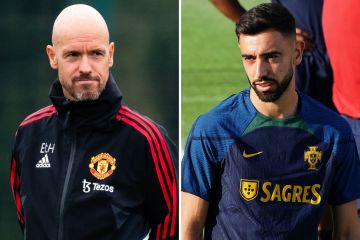 He said in a brutal slap-down of United: “I always wanted to stay at Barcelona and this is why I always remained calm in the summer.”

And on his relationship with Barca, De Jong wasn’t keen to get into details.

De Jong added: “I can’t give too much details away.

“But look.. the club has it’s own ideas and I have my own ideas too and sometimes this clashes with each other.

“But at the end of the day things went OK.”

The ex-Ajax ace has played eight times so far this season and has one league goal to his name.

Barca had a big summer spend and brought in star names such as Robert Lewandowski, Jules Kounde, Raphinha and Franck Kessie.

Xavi is hoping to close the gap on current LaLiga and Champions League holders Real Madrid.

Barca are sat second in the table, two points off Real at the top of the league.

The two sides are scheduled to meet on October 16 at the Bernabeu.