FUMING Manchester United fans know their pitch will be in top condition next season – but they are all demanding some new signings to play on it.

The club took to their Instagram page on Tuesday to share a video of their grounds team hard at work on the Old Trafford turf.

It featured the staff mowing the famous field in a striped design as the sun beat down on the red seats of the 76,000-seater stadium.

United captioned the post: “Summer pitch designs,” although Premier League rules mean it will need to return to the standard squares for matches.

But very few supporters were bothered about the fancy designs on the grass – and instead wanted their unpopular owners to cut some cheques on players instead.

One said: “Great pitch great pitch – now do some transfers.” 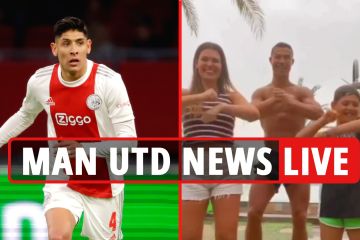 A third added: “How about some summer signings?”

And a final user simply commented: “Sign a player,” which received more than 800 likes.

SunSport revealed Erik ten Hag is on the brink of completing his first signing as Red Devils boss.

His team-mates Jurrien Timber and Lisandro Martinez have also been linked.

Elsewhere, Frenkie de Jong and Christian Eriksen are both targets in midfield.

United begin their season at home to Brighton on August 7 – and will be desperate to win their first trophy since the Europa League in 2017.