GEORGINA RODRIGUEZ is back in Manchester as Cristiano Ronaldo thrashes out his future at United.

The glamorous Wag, 28, has been sunning herself in Spain this month.

But Georgina returned to the cooler climes of the UK this week.

And she announced her presence with a post on social media.

That’s a huge drop from Madrid, which has been seeing temperatures in the high 30s. 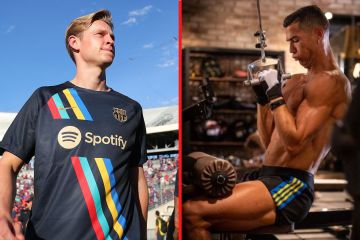 Georgina also showed her devotion to Ronaldo, adding in a snap of matching ‘C’ and ‘G’ coffee mugs resting next to a plate of pancakes.

But she may not be experiencing Manchester’s mildness for much longer.

That’s because Ronaldo is desperate to quit Old Trafford this summer.

Ronnie has since been training under new manager Erik ten Hag.

But he remains determined to find a new club this summer after Chelsea and Bayern Munich ruled out moves.

Atletico Madrid have also been linked with Ronnie despite his legendary status at Real.

And a return to Spain would certainly suit Georgina, who is reportedly pushing for Ronaldo to head back.

But Atletico too have now talked down a deal for Ronnie, leaving him stuck at United for the time being.

What happened to the 11 players? – GiveMeSport