TOTTENHAM striker Harry Kane is reportedly “curious” to listen to any Manchester United offer before deciding on his future.

The 28-year-old was close to leaving Spurs last summer but a deal with Manchester City couldn’t be agreed.

Man Utd could look to capitalise on Man City’s shortcomings and try to sign long-term target Kane in the upcoming transfer window.

And according to The Athletic, Kane would be “curious to hear” Man Utd out before deciding where he will play his football next season.

Kane has two years left on his deal at Spurs and turns 29 in July.

Should chairman Daniel Levy sanction the sale of the academy graduate, it could spell disaster for Spurs in terms of keeping manager Antonio Conte happy. 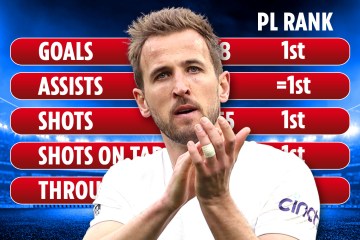 Selling main man Kane could send the wrong message to the Italian that Tottenham are not interested in competing next season.

And the report states that Paris Saint-Germain would come calling for Conte if current manager Mauricio Pochettino leaves in the summer.

The Parisians can deliver Champions League football for Conte and he’d be in charge of a star-studded team.

Should Kane walk out in the summer in search of trophies, Spurs could sign Inter Milan striker Lautaro Martinez.

The Argentine worked with Conte during last season’s Serie A title win.

Martinez scored and assisted 11 in 48 games for Inter.

And he has continued his fine form this term, scoring 16 in 40.