The Prem duo are interested in signing the Canada international with the pair desperate to improve their respective frontlines.

David has caught the eye having scored 24 Ligue 1 goals since the start of last season.

He also boasts an impressive record on the international stage, although he wasn’t able to score in his three World Cup outings.

And the 22-year-old has already said he’s keen on playing in the Premier League after recently making a come-and-get-me plea.

He said: “The Premier League is the best league in the world and every player would want to play there some day.” 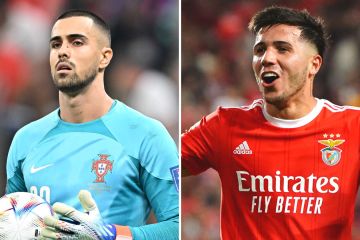 This comes despite Marcus Rashford’s form with the England star netting his tenth goal of the season against Nottingham Forest.

The Dutchman said: “We are aware we lost a striker, so I think we have to get a striker in, but it has to be the right one.”

“The right one is a player that brings quality to the team, not just adding to the squad because that only gives you problems.

“And, you know the criteria is high here at Manchester United.”

United have already missed out on Cody Gakpo, who’s agreed a move Liverpool, but their hopes of bringing David to Old Trafford have been boosted by Fonseca’s comments.

Hold told La Voix des Sports: “It will be difficult to keep Jonathan David at the club next season.

“There are not many strikers with his skills and numbers in Europe. He’s just 22.