‘Life is good!’ – Manchester United fans express their DELIGHT as Anthony Martial opens his account on loan at Sevilla, netting his first goal since October in their Europa League win over Dinamo Zagreb

Anthony Martial opened his account for Sevilla in their 3-1 Europa League win over Dinamo Zagreb on Thursday night – much to the delight of Manchester United fans.

Martial, who joined the Spanish club on loan from United in January, added the third for Julen Lopetegui’s men on the stroke of half-time.

Ivan Rakitic had fired them ahead from the penalty spot after 13 minutes at the Ramon Sanchez-Pizjuan, before Mislav Orsic levelled proceedings four minutes before the break.

Yet just as it seemed Zagreb would head in at the interval all square, Lucas Ocampos and Martial netted in the space of two minutes to give Sevilla breathing space. 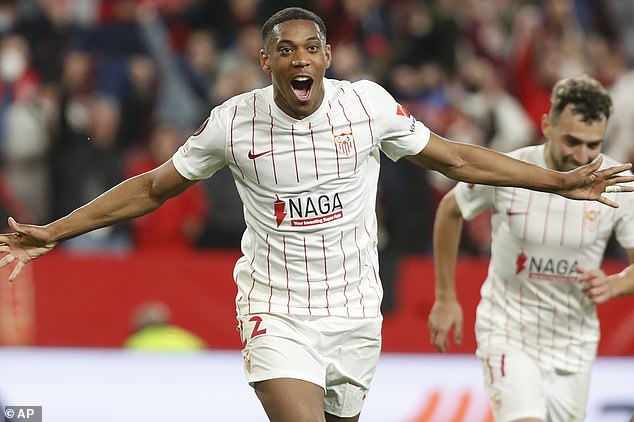 The on-loan United forward took his goal expertly, slotting home from inside the box with precision to get off the mark for his new club.

And as well as being his maiden goal for Sevilla, it was also his first altogether since October 2.

United fans took to Twitter to heap praise on Martial for breaking his duck on Thursday night, insisting they are looking forward to seeing him return to Old Trafford this summer. 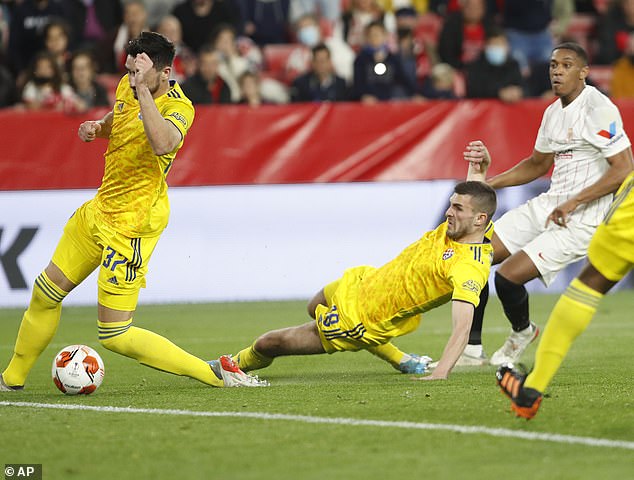 One wrote: ‘Martial scores his first goal for Sevilla in the Europa League (clapping emojis)’.

Another said: ‘Martial and Donny (van de Beek) are both cooking at there respective clubs, life is good’.

A fourth commented: ‘Anthony Martial scores again for Sevilla!!! I can’t wait to see him back at my club in the summer.’

I can’t wait to see him back at my club in the summer. #UEL

Nevertheless, not all United supporters were pleased to see Martial rediscover his shooting boots, with others questioning why he was allowed to leave on loan last month.

One said: ‘Martial scoring whilst (Marcus) Rashford out here stinking out the place.’

Along with a GIF of a man sighing, another posted: ‘We loaned out martial to play (Cristiano) Ronaldo and (Edinson) Cavani’

While a third argued: ‘Martial doesn’t defend is the biggest myth spread by Top Reds followed by Ole’s wonderful rebuild. You lot should watch him play for Sevilla under a competent manager & you will hang your heads in shame’.