Rangnick was appointed on a temporary basis late last year after Ole Gunnar Solskjaer was relieved of his duties at Old Trafford.

United made the appointment despite Rangnick’s last managerial role coming two years prior at RB Leipzig.

In fact, Rangnick was plucked from his manager of sports and development role at Lokomotiv Moscow.

And his two-year stint out of club management was evident as he struggled to get a firm grip on the first-team.

United crashed out of the Champions League in the Round of 16 to Atletico Madrid. 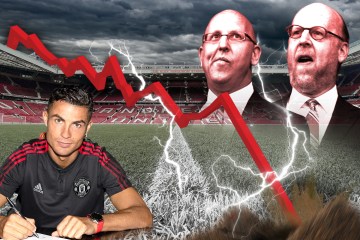 The Red Devils also failed to qualify for Europe’s top club competition through their league finish.

Rangnick’s men settled for sixth, condemning them to Europa League football this term.

However, one positive from Rangnick’s stint is that he wasn’t shy to publicly highlight the problems at the club.

Nonetheless, the results on the pitch weren’t good enough, and as revealed by journalist Kieran Maguire, Rangnick’s dismissal set United back eight figures.

Erik ten Hag took over in the summer, leaving long-term club Ajax behind, and Rangnick was supposed to take up a consultancy role to support the new boss.

However, the new role never came about and the two parties went their separate ways, resulting in the eye-watering cost to sack Rangnick.

Rangnick has since moved into international management, taking over the Austrian national team.

And Ten Hag was backed to the tune of £216m this summer.

United look miles more disciplined and spirited under the Dutchman.

After a turbulent start to their league campaign with losses to Brighton and Brentford, United are on a four-game win streak and sit fifth in the table.

One of their wins came against league leaders Arsenal in a 3-1 victory at home.

But they face arguably their toughest test next when they travel to neighbours City on October 2.