MANCHESTER UNITED have told agents to find the best FREE TRANSFERS this summer — as they do not have a bottomless pit of cash.

Interim manager Ralf Rangnick said as many as ten new players were needed to make the Red Devils competitive again.

Incoming boss Erik ten Hag will be given a budget of around £100million, which is not enough to fund a major overhaul.

United have spent £1BILLION on players since Sir Alex Ferguson retired in 2013.

The club’s transfer pot has been hit hard by their failure to qualify for next season’s Champions League and the knock-on effect of playing behind closed doors due to Covid.

But they are aware of the heavy criticism of their scatter-gun spending in the post-Fergie era. 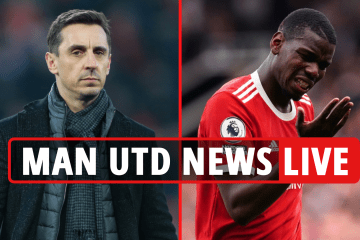 So new chief executive Richard Arnold is leading a major overhaul of the recruitment department.

The likes of Juventus forward Paulo Dybala, AC Milan’s Franck Kessie and Ousmane Dembele of Barcelona are among a number of stellar names whose contracts expire this summer, although it’s not known if United will target any of those stars.

Meanwhile, Cristiano Ronaldo has told United tea-mates he will STAY at Old Trafford – if Ten Hag wants him.

As SunSport revealed on Sunday, the Portuguese superstar, 37, wants to see out the final year of his Old Trafford contract despite the Red Devils failing to nab a place in next year’s Champions League.

It was feared without a place in Europe’s biggest competition, Ronaldo would agitate for a move.

But ahead of new boss Ten Hag’s arrival a United insider revealed: “Ronaldo told the players he’s not going anywhere unless the club say they don’t want him.

“No one is more disappointed than him about how the season has panned out.

“But he doesn’t want to leave on a low and wants to help get the club back into the Champions League and try and win a trophy next year.

“However, he has told them if the new boss wants to go in a different direction, then he will have no hard feelings and has no regrets about coming back to Old Trafford.”