Home News Man Utd, Liverpool defenders in XI of PL regulars who began the season out in the cold

Diogo Dalot couldn’t get a game at the start of the season, Harry Winks’ Spurs career was ‘dead and buried’, and nobody knew Joelinton was a world-class box-to-boxer.

Here’s a team that, unlike this XI who we can’t believe started the season, began the campaign on the bench. If they were even that lucky.

GOALKEEPER: Ben Foster (Watford)
The Watford goalkeeper began the season GoPro-ing from the bench, with Xisco preferring to start Daniel Bachmann. For the opening two games, Foster was back-up before being left out of the match-day squad altogether for the next two. But an injury to Bachmann gave Foster a chance to reclaim the No.1 spot, one he has taken, cementing his status with immediate returns to the side after injuries and Covid. Bachmann is not a happy bunny having supposedly rejected interest from Ajax and Arsenal in the summer under the assumption he’d be the Hornets’ No.1.

LEFT-BACK: Diogo Dalot (Manchester United)
Few Manchester United players have benefitted from Ralf Rangnick’s arrival as much as Dalot. At the start of the season, he was second fiddle to a full-back who can do a slide tackle but not much else. Dalot played a single minute in the first five games – he still managed to collect a booking – and he made only a further three substitute appearances before Ole Gunnar Solskjaer was sacked. His first Premier League start came under Michael Carrick; the only game he hasn’t played for Rangnick was the only match the interim manager has lost. Dalot moves to left-back here because that’s where his first appearance of the campaign came against Aston Villa. And we’re desperate for a left-back.

CENTRE-BACK: Fabian Schar (Newcastle United)
Steve Bruce took a dislike to Schar, playing the centre-back in only the second and third of the 11 games he presided over at the start of the season. The Switzerland international spent the opening day and almost three months before Bruce was sacked on the bench without a sniff of a cameo. Then Eddie Howe came in and immediately restored Schar to the Newcastle defence, where he has been for all but one of a dozen games.

Seen rumours of Fabian Schar being offered a new contract at #NUFC I”ve been a big fan of his good alongside Burn last weekend even if it’s for a couple of years would still like to see him stay. 👌 pic.twitter.com/egtAR49U7l

CENTRE-BACK: Ibrahima Konate (Liverpool)
A £35million price tag wasn’t enough to grant new signing Konate an automatic start at the beginning of the season, with Jurgen Klopp easing him slowly into the Liverpool defence. That process continues, but Konate is being allowed more game time having sat out all but one of the opening eight matches of the season. He is yet to play in more than two consecutive Premier League games but his Champions League performance against Inter suggests Klopp’s approach is paying dividends.

RIGHT-BACK: Matt Doherty (Tottenham)
The right-back must have thought that the appointment of his old Wolves boss would enhance his prospects at Tottenham but that proved not to be the case. In the 10 games Nuno was allowed, Doherty played a total of seven minutes. He has still yet to convince anyone that he is the answer to Spurs’ problems at right wing-back but in the absence of a replacement in January, Antonio Conte seems to trust the Republic of Ireland international as much as any of the other contenders for the spot.

CENTRAL MIDFIELD: Harry Winks (Tottemham)
Similarly, Winks’ Tottenham career looked ‘dead and buried’ while Nuno was picking the team. He played a minute at Wolves in the second game of the season before his only start was curtailed after an hour of a 3-0 defeat at Palace. But Conte seems to trust Winks, who has played in nine of the new manager’s Premier League matches, starting seven of them.

CENTRAL MIDFIELD: Adam Forshaw (Leeds United)
The midfielder’s return from a serious hip injury has been one of the more positive stories of Leeds’ season. Forshaw missed the entirety of the Whites’ first campaign back in the Premier League and more than two years in total. But he was fit enough to begin the current campaign on the bench before finally making his return eight games into the season. Two substitute appearances preceded his first start against Leicester, since when he has missed only one of a dozen games, starting nine,

RIGHT MIDFIELD: Anthony Gordon (Everton)
Gordon too has been a rare bright spot in a miserable season for his club. Under Rafa Benitez, he played a solitary minute for Everton in the opening four games, waiting until October to make his first start. Benitez gradually gave Gordon more responsibility when the ex-manager found some of his more senior players less trustworthy, but Frank Lampard wasted no time in demonstrating his faith in the 20-year-old.

LEFT MIDFIELD: Joelinton (Newcastle United)
The Brazilian began the first three games of Newcastle’s season on the bench, continuing the charade that he was a centre-forward. Bruce moved him wider in a run of games before he was axed, but not until Howe redeployed him as a midfielder, has he begun to finally prosper in a black-and-white shirt. Under the new-ish manager, Joelinton has started all but one of a dozen games, in the process becoming arguably Newcastle’s most consistent performer. 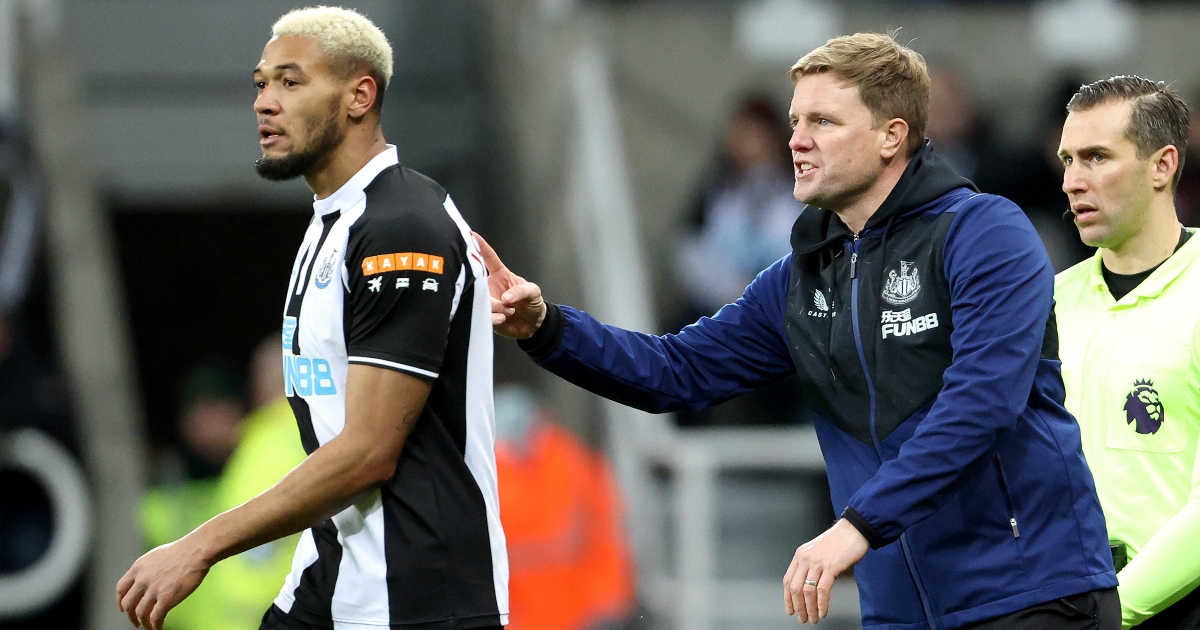 STRIKER: Armando Broja (Southampton)
The 20-year-old has gone from an unheralded loan signing for Southampton to an in-demand centre-forward rated at anything up to £50million. Broja arrived on the same day Saints signed Adam Armstrong, with the arrival from Blackburn given much greater fanfare. The loanee sat out the first two games of the season before being made to wait until mid-October for his first inclusion in Ralph Hasenhuttl’s XI. Two goals in his first two starts and four more since have made Broja Saints’ leading marksman, starting all but one of the last 10 games.

STRIKER: Patson Daka (Leicester City)
Daka might have been rethinking his theory after a £22million summer move that Leicester is “the perfect place for me” while starting the first 14 Premier League games of the season on the bench. He left it only five times before his first start in December but, in the absence of Jamie Vardy, Daka has started five of seven matches since, scoring three goals and laying on two more.