MANCHESTER UNITED are eyeing a transfer move for Napoli defender Kim Min-jae, according to reports.

The South Korea international, 25, only joined Napoli in the summer following a £16million switch from Fenerbahce.

But he has impressed for the Italian side, scoring two goals in eight games and helping them to the top of the Serie A table, as well as a 4-1 win over Liverpool.

United are showing interest in Kim and will hold talks with Napoli about signing the centre-back in January, according to CNN Turkey.

But it is claimed that clause will not be available in the January transfer window so United may have to wait, or negotiate a fee with Napoli. 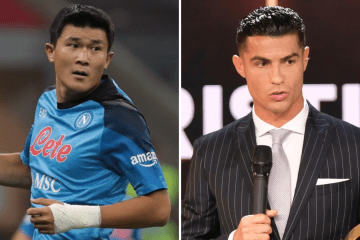 Tottenham and Juventus also showed interest in Kim ahead of his transfer to Napoli.

But like Erik ten Hag, Antonio Conte opted to sign Clement Lenglet on loan from Barcelona instead.

Ten Hag signed Lisandro Martinez from Ajax and the Argentine has since built a good defensive partnership with Raphael Varane.

That pair have ousted captain Harry Maguire from the United team but Gareth Southgate has faith in the England star and backs him to do well at the World Cup.

He said: “Whatever reputation I have, I’m putting it on there.

“You always have to back your judgement and we feel he is an important player.

“He is our most dominant aerial centre-back.

“Him and John Stones are incredible with the ball – the amount of pressure they have taken for the team in tournaments we have played because we don’t always have that midfield pivot player who can progress the game.

“It means there is a huge amount more pressure on our centre backs to use the ball well and those two are as good as any in world football at doing that.”