MARCUS RASHFORD returned in joyous form from the World Cup as Manchester United overcame a lively Burnely side 2-0 to reach the EFL Cup quarter-finals.

But mainly it was an opportunity for Ten Hag to see how much the Red Devils miss Cristiano Ronaldo up front.

Slovakian keeper had nothing to do until an astonishing two minutes near the end of the first half.

He readjusted to tip round a fierce drive from Burnley dangerman Manuel Benson. But he then came far out to flap at a head-high cross, with Casemiro hooking the resulting ricochet off the line. Perhaps rattled by that, the loan stopper promptly let a soft backpass squirm under his foot and had to run back to clear. 5 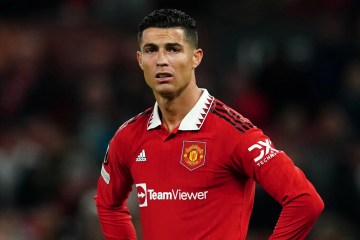 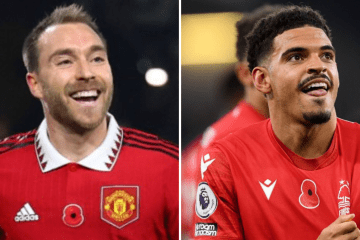 Finally got his chance due to Portugal right-back Diogo Dalot’s injury.

Knows he needs to attack far more than he’s usually comfortable with if he’s to impress Ten Hag – and did just that perfectly for United’s brilliant breakthrough. He did well to reach a lofted pass from Bruno Fernandes, let alone deliver a beautiful first-time cross on the slide for Christian Eriksen to thump home. 6

Added composure as an emergency centre-back.

But Burnley’s eager pressing occasionally caused problems from crosses that you might not expect against a regular central defence. Stayed calm throughout, though. 6

Did little wrong but also not much to suggest he can usurp first-choice centre-backs Raphael Varane and Lisandro Martinez.

Stood firm when Burnley pressed in the last half-hour. 6

Comfortable at left-back, as you’d expect. But involved in few important moments. Replaced by Brandon Williams late on. 5

Guarantees the graft but never quite the craft to be a nailed-on starter for United when they return to the Prem. Again energetic and tried to drive forward through the middle.

Blazed an inviting chance high from the edge of the box. 6

Generally looking for the progressive, menacing pass rather than the simple ball.

And arrived with superb timing to crack United ahead on 27 minutes. Less influential after the break. 6

Even more than Eriksen, the Portugal playmaker was keen to attempt killer balls rather than just safe link-play.

Warmed up with one dangerous flick early on,then raked a crossfield ball that led to Wan-Bissaka teeing up Eriksen’s goal. 7.

Rashford aside, the Argentian winger was surely the major positive for United on a night when of course it was difficult to learn too much.

The 18-year-old was bursting with confidence, hunger and confidence from the start, though he faded before being replaced. 7

Conjured a double jink for a fierce deflected shot tipped round – but his moments of real danger were relatively few. 5

Not at his liveliest in the first half after returning from the World Cup but then…!

Ranged mainly from the right of the attack to the centre,

Laid off a deft cushion pass for McTominay to blaze high.

And then notched a scintillating solo goal to double United’s lead. Jinking through at weaving at high speed – ala Ronaldo at his pomp – he finished with a glorious low drive into the far corner. 8