With the 2023 winter transfer window opening on January 1, we round up the players linked with moves in and out of Manchester United.

Ten Haag: We are looking for a striker

Erik Ten Haag has confirmed Manchester United are in the market for a striker this January window.

“We are always in the market, but it has to match the sporting criteria but also the financial criteria. We do what we can to bring in the players we need.”

Reports have suggested that any new striker brought in during January by Manchester United may have to be a loan deal rather than a permanent transfer – Portugal star Joao Felix has been mentioned, but have they already signed a Portuguese striker without even the club knowing?

The Premier League website has shown a player called Betinho in their squad, despite the club announcing no new signings.

Formerly of Sporting Lisbon, Betinho went on to have spells at Lusitania, SC Espinho and even made one league appearance for Brentford during the 14/15 season in the 3-0 defeat to Norwich City.

It’s not the news Manchester United fans want to hear but the Manchester Evening News is reporting that any new striker brought in during January may have to be a loan deal rather than a permanent transfer.

‘After a £225m spend in the summer funds are limited at Old Trafford,’ the newspaper reports.

‘That means the club are assessing options primarily available on loan, rather than looking to recruit a forward on a permanent deal in the mid-season window.

‘A short-term move for a striker is the most likely outcome in January. Atletico Madrid’s Portugal international Joao Felix could be available on a temporary basis, although he is likely to command a substantial loan fee and high wages.’

Manchester United have triggered one-year options to extend the contracts of Marcus Rashford, Luke Shaw, Diogo Dalot and Fred to the end of the 2023/24 season.

It is also understood that the same action has not been taken for David de Gea’s contract, with the club in positive talks with the Spain goalkeeper about a potential new deal.

Manchester United are looking at forward players and right-backs ahead of the January transfer window – but there is a significant chance they will not sign anyone next month. 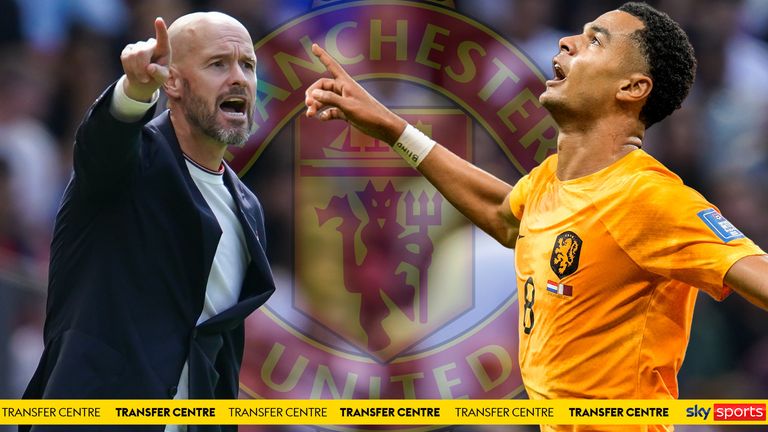 United are keeping an eye on a number of right-backs, but a move for one is likely to depend on whether Aaron Wan-Bissaka leaves.

Who have Man Utd been linked with?

Diogo Costa – United are prepared to break a transfer record to land the Porto goalkeeper (Sun, December 27); United are pressing on with plans to target Costa despite some less-than-convincing displays at the World Cup in Qatar (Daily Express, December 14).

Frenkie de Jong – United’s ongoing pursuit of the Barcelona midfielder has reportedly hit a major roadblock after the Catalan club reaffirmed their commitment to the player (Daily Mail, December 27)

Joao Felix – Manchester United and Arsenal have been told Atletico Madrid will allow Joao Felix to leave the club on loan in January as long as his half-season FFP cost of around £8m is paid as a fee (Daily Record, December 24).

Enzo Fernandez – Benfica have reportedly placed a £105m price tag on midfielder Fernandez, a potential target for Liverpool and Manchester United, in the wake of a fine set of performances for World Cup champions Argentina (The Sun, December 23).

Youssoufa Moukoko – Chelsea face competition from Manchester United and Liverpool for Borussia Dortmund’s Moukoko, but interested clubs will have to convince the 18-year-old German that he will not be signed to sit on the bench (The Times, December 15).

Kim Min-Jae – Manchester United have renewed their interest in South Korea defender Kim, but now face having to pay Napoli potentially 10-times more than the £3m they could have signed him for from Beijing Sinobo Guoan 18 months ago (Sunday Mirror, December 11).

The players linked with a Man Utd exit

Anthony Elanga – The United ace s being targeted by Everton ahead of the January transfer window (Sun, December 27).

Fred – PSG are interested in signing the United midfielder despite the Red Devils activating a 12-month extension on the Brazil international’s contract (Sun, December 24).

Manchester United have told manager Erik ten Hag that an Old Trafford takeover would give him greater spending power to put the club back at the top of English football (Daily Mail, December 15).

What are the latest contract talks?

Manchester United have triggered one-year options to extend the contracts of Marcus Rashford, Luke Shaw, Diogo Dalot and Fred to the end of the 2023/24 season (Sky Sports, December 20).

Manchester United are in talks with David de Gea over a new short-term deal after triggering extensions for four other first-team players (The Times, December 21).