Man Utd have been told to sign the “best midfielder in the world” who already has the “stature of Steven Gerrard” to replace the outgoing Paul Pogba.

Pogba, 28, is poised to leave Old Trafford for the second time this summer. The Frenchman will be out of contract and at present, there is little indication he will extend his stay.

Pogba’s time at United during his second stint has been characterised by underachievement and inconsistency, though there can be no doubt as to the talent he possesses. Indeed, Pogba frequently showcases his true potential in the international arena with France.

But at club level, Pogba has regularly flattered to deceive and former United striker Teddy Sheringham wants a different type of player drafted in as his successor.

The 23-year-old has developed into a complete midfielder with the Hammers. Indeed, Sheringham compared him to Liverpool legend Steven Gerrard in his assessment.

What’s more, Sheringham reckons Rice is already the “best midfielder in the world”. Whether Rice can stake a claim to that accolade is open to debate. The likes of Kevin De Bruyne may have something to say on the matter.

Nevertheless, Sheringham explained why Man Utd should break the bank for Rice to replace Pogba who he claimed has the “wrong character” for the Red Devils.

“It’s going to be hard [to keep him],” said Sheringham. “I spoke to West Ham supporters and said, ‘he is the best midfielder in the world at the moment’. I rate him highly. He’s got everything a central midfielder needs. 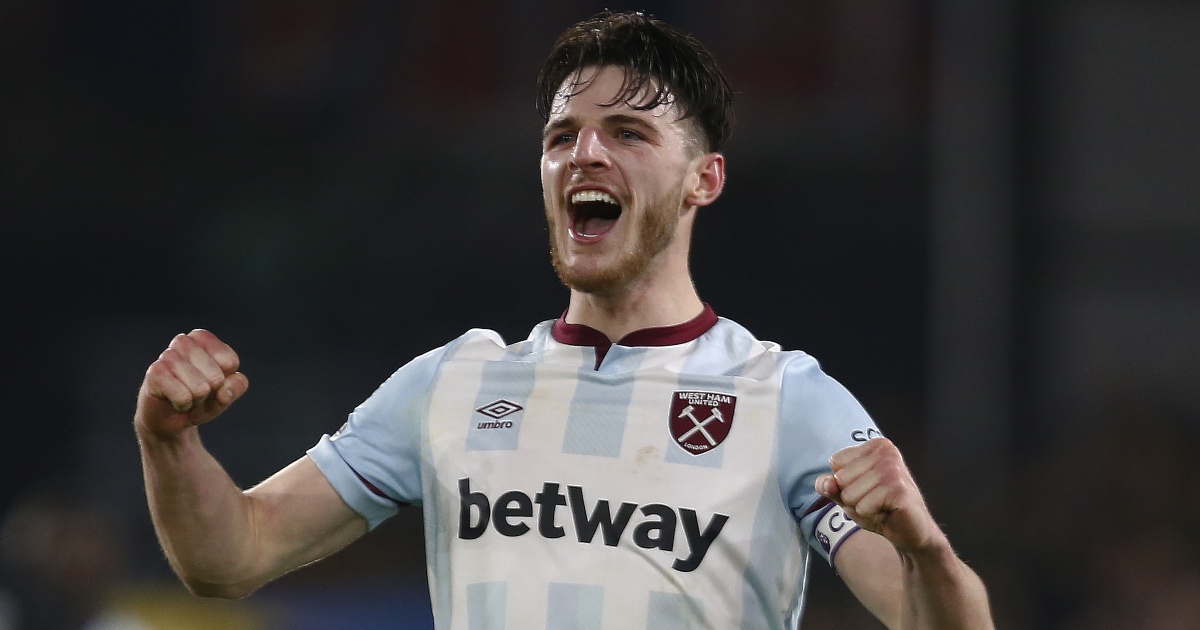 “He understands the game, he’s got good pace, he can control the ball, pass it, make good tackles and get forward.

“He has the stature of Steven Gerrard in midfield – he’s that dominant now that even when he’s getting closed down. He’s got good pace and power about him that he can get away from midfielders. That’s very unusual to have that in a central midfield position.

“[Declan would be an upgrade on Pogba] because Declan is the best midfielder in the world. Pogba is a talented boy, but leads with the wrong character. He doesn’t inspire people around him, he doesn’t inspire his supporters around him.

“Whereas someone like Declan does. You want to roll with him, the way he plays the game.”

Rice’s current contract with West Ham expires in 2024, though the club retain an option for a further 12 months. David Moyes previously suggested Rice would command north of £100m, with the latest valuation settling around the £120m mark.

The midfielder set tongues wagging when revealing his burning desire to play elite level European football. United and Chelsea are the two clubs drawing the strongest links, though the Independent’s Miguel Delaney claimed it is the Blues who are Rice’s preferred choice.

Meanwhile, Sheringham slammed the current state of his former side following their defeat to Manchester City.

“I have seen both sides of the story,” Sheringham told Sky Sports‘ Monday Night Football. “But I have also been in it where there are fragments in a team, in a club.

“I have played in a very dominant Manchester United side where it is demanded that you are 100 per cent committed to the cause and everyone is rowing in the same boat together led by a top manager.

“When you play against a team like Manchester City they find every little hole in your set-up. They work you and they work you again.

“Everyone is trying hard to stop that but then they come back out and they go for another area, they keep prodding at you. It grinds you down when these teams keep dominating you.”

“When you are playing in a team that is focused and all rowing in the same way it is all great. But when you are playing for a manager and you’re thinking, ‘He won’t be here next season. I don’t have to try that hard, he’ll be gone, I’ll work for the next manager.’ There are vibes like that and you can see them all over the pitch.

“Players are being left out. Is he injured? Is he not? There are just problems at the club. I think that comes from the leadership at the football club.”