Home News Man Utd were rejected by Marko Arnautovic and transfer collapse had NOTHING to do with unhappy fans, says Bologna chief

MANCHESTER UNITED’s pursuit of ex-West Ham striker Marko Arnautovic ended because the player REJECTED the move, it has been revealed.

Erik ten Hag was keen on reuniting with Arnautovic, 33, a player he knows from the Austrian’s time playing in Holland.

Bologna ace Arnautovic would’ve provided cover for the then potential departure of Cristiano Ronaldo, as well as for injured star Anthony Martial.

United fans were far from pleased with being linked with a move for Arnautovic, and a deal was stopped dead in its tracks, which many believe was to do with pressure from the Old Trafford faithful.

However, according to Bologna’s director of football, Marco Di Vaio, Arnautovic in fact REJECTED a return to the Premier League.

The striker turned United down as he “understood that he is at the centre” of Bologna’s project. 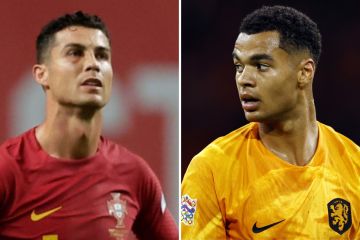 Arnautovic was also hailed as a “true champion” by Di Vaio.

In an interview with Corriere dello Sport, Di Vaio said: “No, no.

“Manchester United did not back down because of those fans, but only because Arnautovic has understood that he is at the centre of our project now and in the coming years.

“Marko behaved like a true champion, realising what he represents for Bologna as a team and a city.”

And Arnautovic has bought into Bologna’s project of being the main man.

He has netted six times in seven Serie A games this term.

His current strike rate has him above regular top goal scorer Ciro Immobile at the top of the charts.

Napoli wizzkid Khvicha Kvaratskhelia, who tore Liverpool apart in the Champions League, and Prem veteran Olivier Giroud are not far behind on four goals each.