Ralf Rangnick says Cristiano Ronaldo missed Sunday’s Manchester derby due to a hip injury, but Roy Keane believes something about the forward’s absence “doesn’t add up”.

With Edinson Cavani also absent from the matchday squad and Marcus Rashford on the bench, United’s attack did not feature an out-and-out striker, with Bruno Fernandes, Jadon Sancho, Anthony Elanga and Paul Pogba operating in forward areas at the Etihad Stadium.

United defenders Raphael Varane and Luke Shaw were also sidelined for the visitors after testing positive for coronavirus.

“We have two Covid cases with Rafa and Luke, and Cristiano has some problems with his hip flexor again on Friday,” United’s interim boss Rangnick told Sky Sports ahead of the game.

It is just the second Premier League game Ronaldo, who has scored just one goal in his last 10 appearances, has missed since rejoining United this season.

But the 37-year-old’s absence appeared to be questioned by his sister, Katia Aveiro, after she liked an Instagram post claiming he is not injured and was dropped by Rangnick for the Manchester derby.

The post from ‘cr7.0_lendario’ read: “Cristiano Ronaldo is not injured and he is not ill. The man is 100 per cent. Good morning to you who, like me, are sad and angry because Rangnick decided to ruin our Sunday by taking CR7 out of the classic against Manchester City simply for tactical reasons.”

Keane: Something doesn’t add up

Speaking ahead of kick-off on Super Sunday, Sky Sports pundit Roy Keane believes something about Ronaldo’s absence “doesn’t add up”.

“It’s a surprise to hear Ronaldo has a hip injury but United have pace, quality. Elanga is a really good, positive player who makes intelligent runs.

“There seems to be more to the Ronaldo story when a manager comes out and talks about a hip flexor. I don’t get it. We talk about Ronaldo being a machine and very rarely getting injured but every now and again he comes out with that… a hip flexor? It doesn’t add up to me.”

Fellow Sky Sports pundit Gary Neville added Ronaldo’s forced absence was not as big a blow as it seemed, given the style of play United were likely to employ.

“United over the last three or four years were a counter-attack team, really comfortable sitting back punching out on the break and that will be exactly the same,” he said before kick-off.

“Cristiano not being in the team, I could never say it’s a positive, but I don’t see it as a big loss that I might do in other games.”

Asked about facing a United side without Ronaldo leading the line, City manager Pep Guardiola told Sky Sports: “Always a tough game in previous seasons. Counter-attacks, with Ralf maybe different if Cristiano doesn’t play because they’ll be more aggressive for the philosophy he has.”

Former striker Andy Cole – who played up front for both United and City – believes Guardiola’s defenders would have been pleased by the news Ronaldo is not playing.

“You can talk about his age and what people perceive him to be contributing in games, but if he’s not playing, as a centre-half, I’d be a lot happier,” Cole told Sky Sports News.

“You know if he gets half a chance there’s a good chance he’ll take it. You don’t get as many goals as he has throughout his career if you don’t know what you’re doing when you get in the box.” 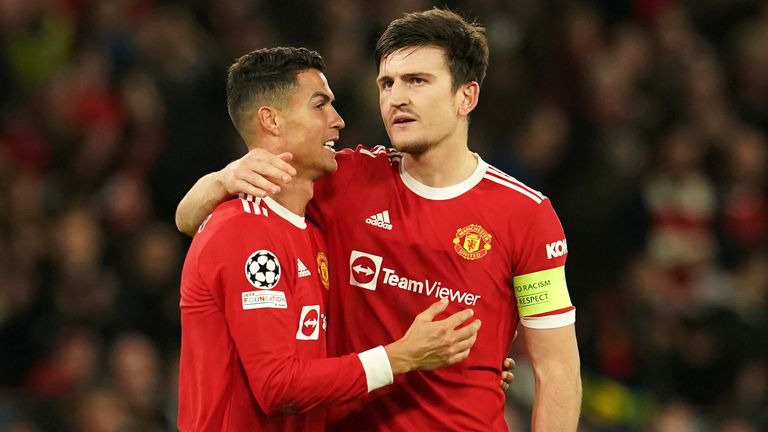 However, Sky Sports’ Paul Merson had said on Soccer Saturday he believed the visitors would have a better chance of winning at the Etihad Stadium if Ronaldo was dropped.

“I’d play [Marcus] Rashford and [Anthony] Elanga,” said Merson. “If they’ve got any chance of winning this game, they have to play on the counter-attack with plenty of pace, skill and energy.

“Personally, I’d leave Ronaldo out of this game. Against Watford, they dominated the game and had something like 80 per cent possession, but they’re not going to have the ball as much against City.

“How many times are they going to be in City’s half dominating the ball? If you’re John Stones or Aymeric Laporte, they would rather play against Ronaldo than mark someone like Rashford. They don’t want to play up against pace.”

Man Utd ‘highly involved’ in battle for defender who would clash with summer signing, as Todd Boehly obsesses over rival Chelsea deal