On This Day in 2006, Celtic visited Manchester United int the Champions League. It was seen as a grudge match between Sir Alex Ferguson and Gordon Strachan after a falling out between the pair at the end of Strachan’s time at Old Trafford.

Six thousand Celtic supporters made the journey to Lancashire hoping that Strachan’s side could pull off a shock result against a side littered with talent. On 21 minutes, they were given a major boost as Jan Venegoor of Hesselink turned sweetly taking down a Artur Boruc kick before firing a shot beyond Edwin Van Der Sar.

As Celtic still do to this day, they could not weather the storm and were pegged back through a Louis Saha penalty. Boruc guessed right but wasn’t able to keep the ball out. It was never a penalty in the first place, Ryan Giggs bought it. Saha struck again as Tommy Gravesen’s mistake was capitalised upon but Celtic drew level through a sublime freekick from Shunsuke Nakamura. The Japanese midfielder lifted the ball up and over the wall leaving United’s No.1 with no chance. Sadly, shortly after half-time, Celtic fell behind as Ole Gunnar Solskjaer pounced – again through a Gravesen error. The Danish midfielder almost redeemed himself but he was foiled by United. Artur Boruc was excellent in goals but the score remained 3-2.

Excellent goals from Vennegoor of Hesselink and Nakamura. pic.twitter.com/0uQVDRxlVr 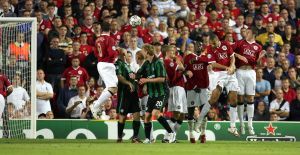