MANCHESTER UNITED are set to do battle with Newcastle to sign both Kalvin Phillips AND Antonio Rudiger, according to reports.

The Red Devils are eyeing a rebuild in the summer when a new long-term managerial appointment is made.

Both midfield and defence are areas which need improvement.

And with Leeds’ place in the Premier League far from secure, United could look to snatch Phillips from one of their biggest rivals.

United also hold an interest in Chelsea’s Champions League-winning defender Rudiger, who could be available for free.

With Chelsea unable to tie players down to new contracts due to owner Roman Abramovich being sanctioned, the German could prove to be a shrewd acquisition. 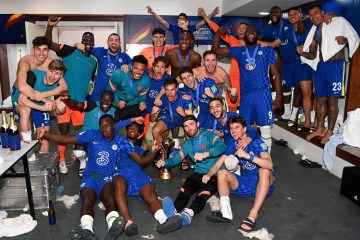 But according to the Daily Mail, United could be rivalled by newly mega-rich Newcastle for both players’ signatures.

The Magpies have made great progress under boss Eddie Howe and their January signings have helped distance themselves from the relegation zone.

And Newcastle want more of the same in the summer by improving their midfield and defence.

The Magpies are big admirers of Phillips and have the financial capabilities to buy the player.

But they may struggle to compete with the offer of European football on the table should United come calling for Phillips too.

Newcastle may also struggle to land Blues defender Rudiger, who is subject to heavy transfer interest from abroad.

Real Madrid, Juventus and Bayern Munich all hold an interest in the German international.

And Rudiger is reportedly hoping to double his £100,000-a-week wages wherever he goes.

Shearer says Saka did something vs Man Utd that ‘speaks volumes’