Ralf Rangnick is losing patience with his Man Utd players, criticising their physicality and admitting nobody in the Premier League concedes goals like them.

Cristiano Ronaldo sealed his hat-trick with a stunning free-kick to rescue a 3-2 victory for Man Utd over Norwich but it was another shoddy showing for the team.

Norwich had created chances throughout the afternoon and scored more than one goal in an away game for just the third time this season. Kieran Dowell headed Teemu Pukki’s cross past David de Gea on the stroke of half-time, and then the Finland striker beat the offside trap to level seven minutes into the second period.

Rangnick said: “If you look at the two goals we conceded, especially the first one, we had the ball on the sideline but we were just not physical enough. As soon as there is body contact we have to be more physical, more aggressive, but we weren’t.

“It was, for me, too easy, and that’s why we are probably the only team in the league who concedes goals like this.”

He added: “We should have defended in a smarter way and not allowed them to have two or three transitional moments with playing three versus two or four versus two. To be honest, Norwich could have scored earlier than we did concede the first goal. We could have conceded a goal earlier than that and that’s why I’m not really happy with our performance when we were not in possession of the ball.”

Ronaldo’s 25-yard thunderbolt free-kick winner with 15 minutes remaining restored some good feeling around the ground, and put the hosts right back in contention to finish fourth. They are just three points behind fourth-placed Tottenham.

FREE TO WATCH: Highlights from Manchester United’s win against Norwich in the Premier League

Rangnick said: “If I just think about the games since I arrived, how many games we have been 1-0 and 2-0 up and in the end only got a point. I mean, this is easily six, eight points that we should have easily have had more. But this brings us back to the same situation that we just didn’t defend well enough in moments like this. And [had it not been for] David de Gea with a brilliant save, we could have been 3-2 down and then probably even have lost the game and this should not happen.

“If you want to defend properly in this league, you just have to be physical, you shouldn’t just allow them to go past ourselves and through our lines like that. That’s what this team doesn’t do well enough, and that’s why we’re still mathematically in the race but we should have easily had eight points more.”

Next up for Manchester United? Liverpool…

The opposition gets tougher for Manchester United next when they travel to Liverpool on Tuesday at 8pm – live on Sky Sports Premier League – as Jurgen Klopp’s team have their eyes on the Premier League title.

Rangnick has admitted his team could be in for a long evening if they repeat the performance levels from the Norwich win.

“I mean, everybody has seen today’s game,” Rangnick said. “We all know what team we’re playing on Tuesday.

“They won against Man City today, they’re in the FA Cup final. In the end they might have the chance to win four trophies this season.

“If we play like we played today, it will be very, very difficult to get even a point out of this game and this is what we have to be realistically aware of.

“So, we need to raise our own level and standard. Probably Fred and Scott (McTominay) will not be back, Raphael Varane will also be a tight race for the game on Tuesday. So far he hasn’t trained with the team.

“We have to be aware that the players that we had available today we will drive to Liverpool and just get anything out of that game.

“If possible we need three points. That can happen in football, it has happened before.

“But we have to be realistic, we have to play a lot better if Liverpool is in possession of the ball than we did today.”

Rangnick on Pogba boos: Not right to target individuals

Ralf Rangnick insists it is not right to target individuals after Paul Pogba was booed off the pitch by some Manchester United supporters during Saturday’s 3-2 win over Norwich in the Premier League.

Cristiano Ronaldo’s hat-trick at Old Trafford boosted United’s hopes of a top-four finish following defeats for rivals Arsenal and Tottenham, but the result glossed over another underwhelming performance and the home fans were not afraid to show their discontent.

Pogba, whose United contract runs out at the end of the season, returned to the starting line-up but struggled to make an impact against the Premier League’s bottom side and was replaced by Juan Mata in the 74th minute with the score at 2-2. 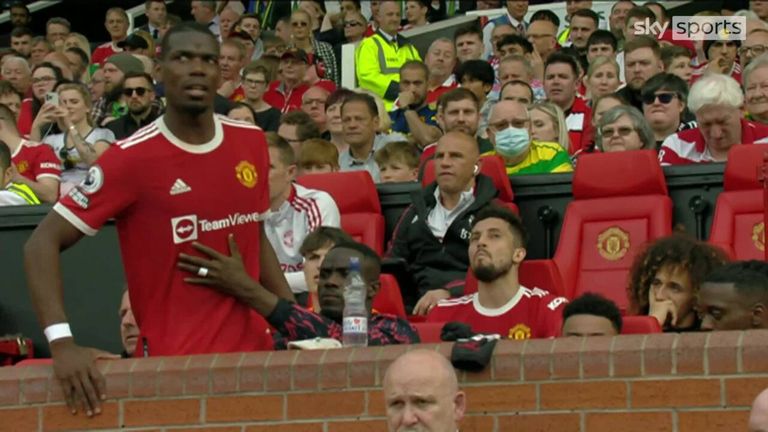 The United midfielder was then jeered as he made his way off the pitch before cupping his ears to a particularly critical corner as he went down the tunnel at full-time.

Although Rangnick admits he did not hear the boos from a section of disgruntled supporters, he insists he does not agree with their actions.

Rangnick said: “I can understand if that the fans are frustrated and disappointed – so are we. Things have stayed, as far as I know, peaceful all the time.

“I don’t think it makes sense to take on and to target any individual person or players because it’s a collective responsibility.”