Manchester United seemed to have fallen foul of their recent habits against Leeds, only for Ralf Rangnick to turn the tide and secure a win.

As is always the case when a football club appoints a thinker (noun: a non-British or Irish national who wears glasses), every subsequent decision they make is met with a general scepticism or distrust. Their tactics are questioned and scoffingly referred to only as part of a wider ‘philosophy’. The prospect of working with psychologists and appointing specific coaches for set-pieces or – shudder the thought – throw-ins – are spoken of in hushed tones during dismissive punditry studio discussions. Quotes are often wilfully misrepresented or misunderstood. Everything is pulled into a vortex of continental cynicism at the expense of context and analysis.

He is foreign and wears glasses, so… pic.twitter.com/lWDinkYX8f

It obscures everything, forces even obvious calls into a prism of nonsense. Ralf Rangnick faced ridicule when he openly wondered why he wouldn’t make Paul Pogba available for selection upon his return from injury. The same sensationalist media that asked the peculiar question poured scorn on the fair answer. The interim Manchester United manager made the mistake of expecting them to understand the benefit a short-term injection of £89.3m excellence would have on the club’s most troubled position.

Some complained that Pogba was being placed in the shop window as further proof of muddled decision making at Old Trafford; Rangnick realised the mannequins in his midfield needed help.

For just over an hour at Elland Road, that approach bore yet more fruit. Pogba has played four Premier League games since being reintroduced, scoring and assisting a goal apiece and being Manchester United’s best player twice. He pulled the strings against Leeds, tormenting Adam Forshaw in particular, only for his influence to fade as the match descended into an aquatic farce. 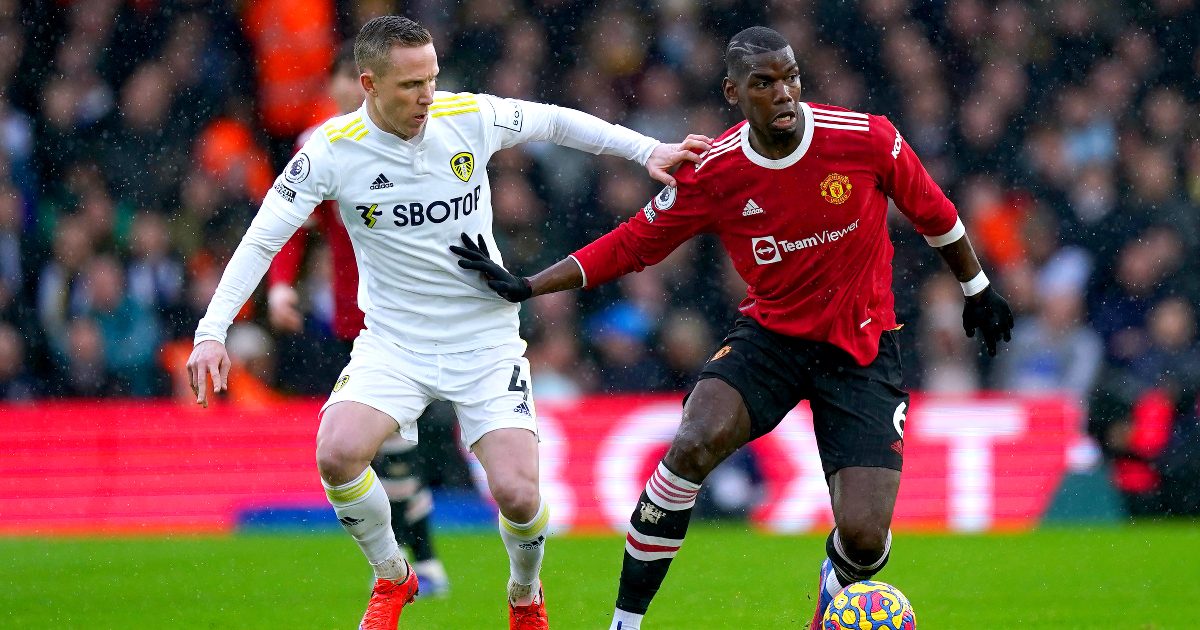 His substitution for Fred was universally condemned when a hard-earned lead became another frustrating stalemate. Rangnick once more turned out to be the wisest man in the room. Manchester United’s players capitulated in one second-half minute. Their manager defused the latest implosion to secure a crucial win.

The visitors overcame their fear of one-goal leads against Brighton in midweek, aided by a Lewis Dunk red card and some profligate Seagulls as they won 2-0. Victory by the same scoreline seemed a fair bet at half-time after Harry Maguire made The Sun look stupid and Bruno Fernandes fulfilled his role as chief pantomime villain with a well-taken header. Leeds had impressed in flashes but their prospects looked bleak.

Perhaps a drenched pitch was the ultimate leveller, although Leeds deserve credit for their notable increase in intensity after the break. Rodrigo’s goal was spectacular and fortuitous. his overhit cross giving off a vague vibe of intent. Raphinha’s equaliser was the result of defensive panic and offensive momentum. Leeds revelled in the conditions. Manchester United wilted. Cristiano Ronaldo picked up a booking for dissent to prove beyond reasonable doubt that he is the leader this club needs.

Manchester United needed something different. They had to change. Yet this was not a problem anyone would have prescribed Fred and Anthony Elanga to solve.

The former, always a better and more important player than many want to suggest, finished emphatically from a lay-off by the brilliant Jadon Sancho. Elanga slotted past Illan Meslier after great work from Fernandes. The Portuguese heard Leeds fans chanting “stand up if you hate Man Utd” as Robin Koch received treatment for a first-half head injury, then spent most of the rest of the game proving his loyalty by going to ground, clutching his ankle and appealing for fouls. But as infuriating as he can be, his quality is enough to shift the needle. Not many players can be quite as decisive, especially amid this sort of chaos.

Manchester United finally managed a game well between those third and fourth goals, following the catastrophe that came soon after the second. They kept possession, regained their composure and waited for opportunities to present themselves, which they so often do in this Leeds defence. Taking them, despite recent underperformance in front of goal, was the easy part.

This was far from a perfect team display, yet not much more can be asked of the manager. Since Rangnick’s first match in charge, only Manchester City have more Premier League points and goals, while no team has lost fewer games. Manchester United are at least on the right track, even if the desired destination remains a speck in the distance.