A trip to play Sir Alex Ferguson’s Manchester United at Old Trafford was always an unsettling, discouraging prospect, no matter how good a side you were. That United were more than just tough to beat, they were formidable, capable of running teams over like a steaming freight train.

Imagine facing that facing that trip as an Everton team coming off the back of a bitterly disappointing 2-1 FA Cup semi-final defeat to Liverpool, then. As an Everton team that had not won at Old Trafford in 20 years, indeed. ‘Nightmare away day’ is the only description that suffices.

On 22 April 2012, that was precisely the predicament David Moyes’ Everton side found themselves in. And when they were 4-2 down with ten minutes to go, it looked like being the culmination of a disastrous week for the Toffees. At that point, it was surely a case of how many United would add.

Somehow, though, Everton staged the comeback of a lifetime. Not only did they draw the game 4-4 with two remarkable late goals, they brought their opponents’ title charge grinding to a halt and perhaps even paved a path for United’s future managerial recruitment.

By 2012, David Moyes had built a bona fide footballing dynasty at Everton. Moyes had been at Goodison since 2002 and had built and re-built several solid sides, taking them from the brink of relegation when he came in to become regular European contenders from 2005 onwards.

Silverware had eluded him however, so the loss to Liverpool, who Everton were ahead of in the league, in that semi-final came as a heavy blow, especially given the way it happened. They had the lead at Wembley, only for an uncharacteristic mistake from Silvain Distin and Andy Carroll’s headed winner three minutes from time to send Liverpool through.

Recalling the game to Goal in 2020, Jamie Carragher said: “They thought they were going to win that day, and to lose the way they did must have killed them. I remember Phil Neville told me that Moyes didn’t speak to anyone for a week after that game!”

Quite how he rallied his troops before the United fixture remains a mystery, if that is true. But – through a mixture of enraged hand gestures and piercing glares, perhaps – he managed just that.

Everton looked the better side in the opening exchanges at Old Trafford and Steven Pienaar, who had missed the semi-final the previous week, cup-tied having played for Tottenham in an earlier round, was at the centre of the Toffees’ sharp play, finding pockets of space to the left of Michael Carrick and Paul Scholes.

And it was Pienaar’s work that led to Everton taking the lead in the 33rd minute. He found Darron Gibson, who played it to Tony Hibbert and Hibbert’s cross floated towards the back post. Nikica Jelavic peeled off Rafael and looped a brilliant header over David De Gea and into the far corner. 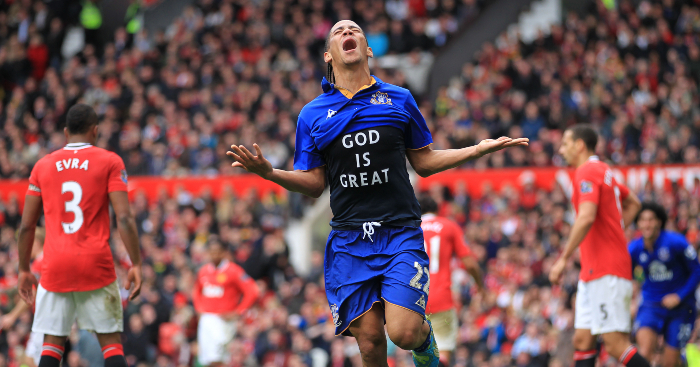 READ: Steven Pienaar: Martinez should’ve said when we were sh*t; Moyes was brutal

It was the same start of the script that had been read at Wembley a week before – Jelavic opening the scoring in the first half. Unfortunately for Everton, what followed was much like what had happened the previous week. Like Liverpool had, United came back. But they did so even more convincingly than Kenny Dalglish’s Reds, getting three goals before the hour mark.

A whipped cross from Nani was headed in by Wayne Rooney to ensure things were level at the break. Then United went all-out at the start of the second period. Danny Welbeck beat former United ‘keeper Tim Howard with an unstoppable curling strike on 57 minutes, before some wonderful interplay set up Nani for a third three minutes later.

Yet United dropped their guard. Hibbert surged up the right again. This time his cross found future United player Marouane Fellaini, who was having an afternoon just as inspired as Pienaar, and the big-haired Belgian volleyed home emphatically from 11 yards.

Everton pushed for an equaliser. Pienaar saw a shot from the edge of the area saved by De Gea. But by pushing up the pitch, Moyes side left space at the back. United’s front two capitalised.

A Welbeck dummy let Rooney have the ball. Welbeck span in behind and Rooney played him in. Rooney burst into the box and Welbeck found the former Everton man again. Rooney made no mistake, his 33rd goal of the season. On Sky, Gary Neville compared the exchange to “Yorke and Cole at their best.” Ferguson raised a clenched fist towards the Stretford End.

It was 4-2, Old Trafford was bouncing. Everton were done, surely. Knackered, emotionally drained. United looked set to maintain their five-point lead over Manchester City at the top of the table and earn themselves the opportunity to win the league at the Etihad the following weekend.

But Moyes’ side refused to succumb. As the Guardian’s match report put it: “[Everton] played as though affronted by the suggestion that they would roll over.”

They came again, in search of absolution for their sins at Wembley a week earlier. Phil Neville lofted a ball towards Fellaini in the area and his mere presence caused havoc. The ball bounced off Jonny Evans and into the path of Jelavic. Bang; a second of the game for the big Croat.

Then the final act of the thrilling encounter. Pienaar’s backheel found Moyes stalwart Tim Cahill, who found Phil Neville, who slid it in to Fellaini. He span and played it into the middle. Pienaar was there and poked it home, just reward for his brilliant work in the preceding 85 minutes. The blue corner of Old Trafford erupted.

⏪ | #OnThisDay in 2012, we shared an 8️⃣-goal classic with @ManUtd at Old Trafford… #EFC pic.twitter.com/4AXJAv3xUF

United did their usual trick, a late onslaught at the Stretford End. But this time it was futile. Howard’s fingertips denied Rio Ferdinand. Everton stood firm.

“A throw‑away, an absolute giveaway,” Ferguson said afterwards. “I can’t believe it.” Nobody could.

Not only had they thrown away the result, they had let City back into the title race. In the 4:30pm kick-off that same day, Roberto Mancini’s side beat Wolves and went within three points of United. With the derby the following week and a better goal difference, the title was suddenly in their hands.

What happened next is perhaps the Premier League’s most regaled story. A 1-0 win for City at the Etihad completed the double over United after the 6-1 rout earlier in the season. Then, on the final day, that game, that goal: “Agueroooooooooo…”

United would likely have gone on to retain the title. Ferguson may well have chosen that moment to retire and name his successor, rather than wait one more year.

Would that successor have been Moyes had his Everton not shown such strength of spirit that afternoon? In 2012, Pep Guardiola was newly available having just finished at Barcelona. By the time Ferguson retired a year later, Guardiola had committed himself to Bayern Munich.

In his book ‘Leading’, Ferguson wrote: “I asked Pep to phone me before he accepted an offer from another club but he didn’t and wound up joining Bayern Munich in July 2013.”

All this is of course mere speculation. But such was the impact of that 4-4 draw, there is plenty worth speculating about.

Kevin Campbell: Arsenal were special, but I fell in love with Everton

Can you name every Everton player to score 15+ goals in the Premier League?