Leeds United and Manchester United might hate each other but there’s been a surprisingly high number of players that have represented both clubs.

Legends of the British game such as Gordon Strachan, Gordon McQueen, Joe Jordan, Dennis Irwin and Johnny Giles crossed the Pennines divide during their career and this trend has continued during the Premier League era.

We’ve investigated how the last nine footballers who played for the Uniteds of Leeds and Manchester and how they fared doing so.

As United’s collection of talented solo artists continues to struggle at Old Trafford, the decision to sell James to Leeds last summer has become increasingly questionable.

The winger almost joined Leeds in January 2019 but, with the Yorkshire club in the Championship, the move fell through and James moved to Manchester United that summer instead.

He started with three goals in his first four Premier League appearances but suffered a dip in form due to his inexperience, technical limitations and United’s inconsistency.

James seemed tailor-made for Bielsa’s Leeds but endured a difficult start to life at Elland Road – though there’s been signs recently that the Wales international is starting to justify his £25million price tag.

Having made a handful of appearances under Louis van Gaal, Borthwick-Jackson was loaned out to Championship Leeds in the search of more first-team football.

But the defender played just six times during his temporary spell at Elland Road – which is less than the total number of appearances he made for the Red Devils.

Borthwick-Jackson is now at Burton Albion following loan spells at the likes of Oldham and Scunthorpe United.

Another disastrous signing for Leeds United.

The defender’s spell in Yorkshire, consisting of 74 appearances between 2013 and 2016, was indicative of the club’s extended funk with some calamitous performances, judicious amounts of errors and some memorable own goals.

The fee for the defender was undisclosed but Leeds would have paid too much if Wooton was free.

Heralded as a generational talent when United signed from Celtic in 2003, Miller struggled to make much headway at Old Trafford

Reflecting upon his time at the club, where he made just 22 first-team appearances, the midfielder said: “Man Utd didn’t work out but I have no regrets about giving it a go.”

Needing more game-time, Miller joined Leeds on a loan deal in November 2005 and was part of the side that lost 3-0 to Watford in the play-off final.

He scored just once in his time with the club, although that was the winner in Leeds’ remarkable 4-3 comeback win at Southampton in November 2005.

Sadly, Miller passed away in February 2018 at the age of just 36 with pancreatic cancer.

After a handful of appearances for United’s first team, Danny Pugh was part of the deal that sent Leeds golden boy Alan Smith to Old Trafford in 2004.

Pugh had two spells with the Whites during his career, spending two years under Kevin Blackwell and helping the side come so close to promotion in 2006.

The midfielder left for Preston, before spending time under Tony Pulis at Stoke, but he returned to Elland Road under Simon Grayson in 2011 and made a further 41 appearances for the Whites.

It’s a transfer that still rankles in west Yorkshire.

Having come through the club’s academy, Smith was Leeds golden boy in the early 2000s but relegation forced their hand.

Everton and Newcastle were linked with his signature but Smith chose the nuclear option – a £7million move to Manchester United. He struggled to hit the same heights at Old Trafford due to serious injury problems but was probably better for United than is commonly remembered.

“There had been talk about me singing in January and I spoke to Sir Alex Ferguson about it,” Smith explained, speaking to the UTD podcast in 2020. “But I couldn’t sign in January because I wanted to keep Leeds up.

“I don’t want to make any excuse for signing for Manchester United because it was a football-based decision. From the club’s [Leeds] point of view, it was financial.

“I’d be doing myself a disservice if I didn’t sign for, arguably at that time, the biggest club in the world.”

We doubt any Leeds supporters would agree with that sentiment.

Poached from West Ham in 2000, Ferdinand quickly established a reputation as one of Europe’s finest defenders at Leeds.

After helping the side reach the Champions League semis in 2001, the England international enjoyed a fine World Cup in Japan and became the first major player sold due to Peter Risdale’s financial excesses.

Having already been made the world’s most expensive defender upon joining Leeds, Ferdinand regained the honour with a £30million switch to Old Trafford in 2002 – and he remains the Yorkshire club’s record sale two decades later.

Despite receiving pelters on his first return to Elland Road, a game United lost 1-0, the centre-back won 14 major honours under Sir Alex Ferguson while Leeds languished in the Football League.

Ferdinand is now a regular pundit on BT Sport and, such is the strength of his Manchester United opinions, you can only picture him in a red shirt now. Still, he was superb during his time at Elland Road, much as Leeds fans might like to forget it.

Sharpe was a cult hero during the early 1990s but there’s always been that suspicion he could have achieved much more had he applied himself more consistently.

After eight years at Old Trafford, during which he won 10 major trophies, Leeds spent a club-record £4.5million on Sharpe in 1996.

But he struggled to ever get going with the Whites due to injury problems and played just 35 times in three years, scoring six goals. To be fair, George Graham would’ve made Neymar into a workhorse. 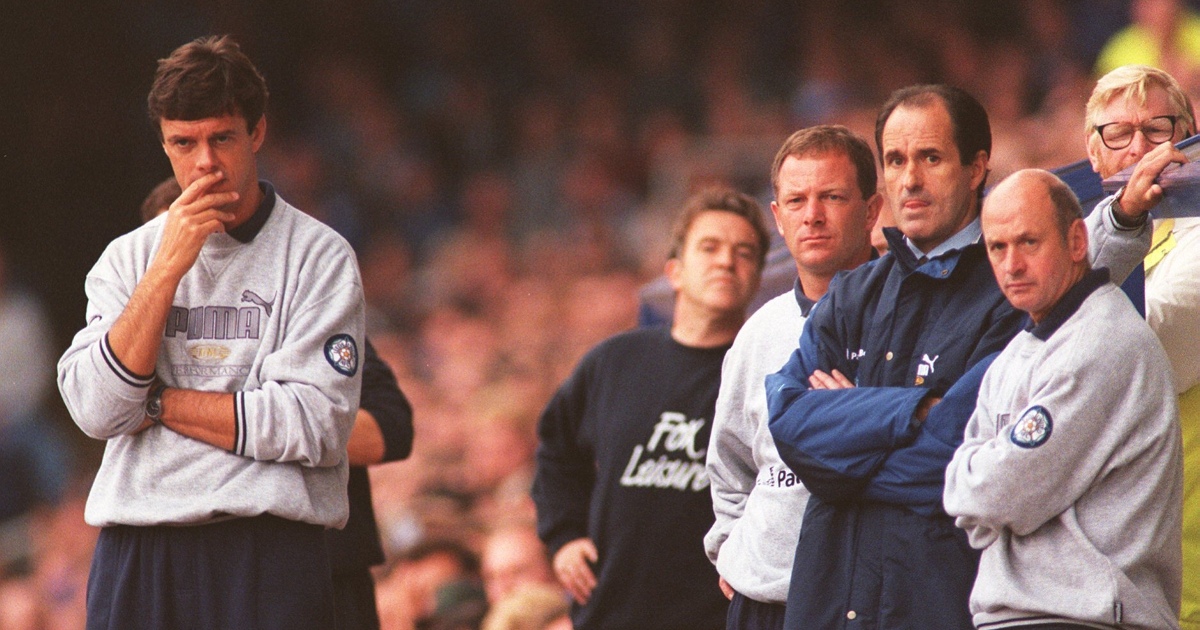 One phone call in 1992 changed the direction of English football history; a penny for the thoughts of Howard Wilkinson…

Eric Cantona: One of English football’s greatest ever bargains