Harry Maguire and Luke Shaw were unused substitutes as Manchester United beat Liverpool 2-1 at Old Trafford on Monday, but what does their omission mean for their hopes of of a place in England’s World Cup squad?

Gareth Southgate was at Old Trafford on Monday night, along with his assistant Steve Holland, hoping to see as many potential England players as possible.

But while Marcus Rashford and Jadon Sancho gave timely reminders to the England boss with impressive performances as United were transformed from the team that had lost to Brentford and Brighton, the sight of Maguire and Shaw – two key players for Southgate in England’s run to the Euro 2020 final – on the bench would have been a concern real concern with the World Cup just 89 days away.

FREE TO WATCH: Highlights from Manchester United’s win against Liverpool

Southgate has always said that, to be selected for his squad, you have to be playing well, and playing regularly, for your club.

So, Maguire’s disappointing performances and his relegation to the bench for one of the biggest games of the Premier League season is extremely worrying for the defender, who is doing neither.

Maguire has been the lynchpin of England’s defence for the past five years, and been a key performer in the last two major tournaments. His defensive and leadership qualities were vital factors in helping England to the World Cup semi-final in Russia, and the Euros final in England.

When will Southgate name his World Cup squad?

Gareth Southgate will submit a long list of players to FIFA on Friday October 21, but the England manager is expected to announce his final World Cup 23-man squad on either November 9-10.

The FIFA deadline is Monday November 14.

England will depart for Qatar on Tuesday November 15 before they face Iran in their opening World Cup group game on November 21 at the Khalifa International Stadium, Doha.

He has been one of the first names on the team sheet for Southgate, who has consistently voiced support for the Manchester United captain. But Maguire’s malaise is proving to be long-lived. After a poor run of form for United in the spring, he was harshly booed by England fans against Ivory Coast in March.

At the time, the England manager called the booing “an absolute joke” and went on to say: “Harry has been in our No 1 pairing through those tournaments and has my full backing and support. But equally, I’m not going to say to anybody….that they are a guaranteed starting in the World Cup team. That’s not the environment I’m looking to create, and not the competition we are going to need.”

What his club manager does next with Maguire will be key to his immediate international future. Is his immediate club future confined to the substitutes’ bench? 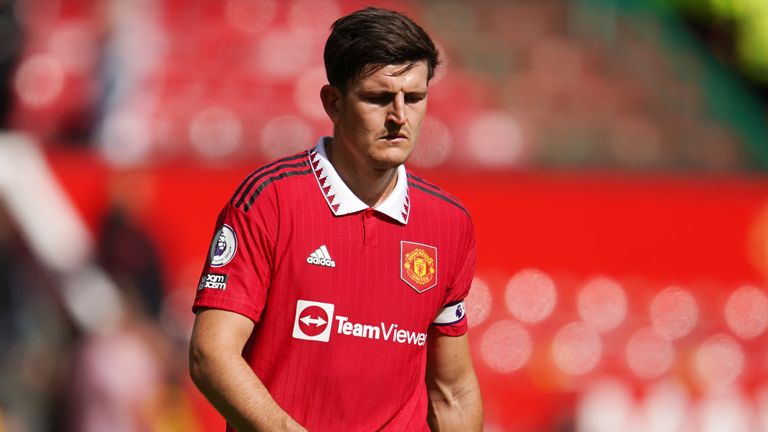 With Maguire in the starting XI for the first two Premier League matches of the season, Manchester United lost both games and conceded six goals. Against Liverpool, with Maguire watching from the bench and Raphael Varane and Lisandro Martinez in central defence, United won their first game of the season, looked much more solid, and conceded just once – against last season’s double cup winners.

If Ten Haag continues to leave Maguire out of his team, it will be increasingly difficult for Southgate to include him in his. However, the longer-term statistics work in Maguire’s favour. Since he joined Manchester United in 2019, the team’s win ratio with him in the side is 51 per cent. Without him in the team, that win percentage drops hugely, to 23.1 per cent.

In the last three years, United have won 1.8 points per game with Maguire involved in matches, compared with just 1.2 points per game when he’s been absent. Southgate will no doubt point to those sorts of stats if, as expected, he still includes Maguire in his next squad.

What of Luke Shaw, who was an England regular at left-back for much of last season, in between injury absences?

Substituted at half-time by Ten Haag in the 4-0 defeat at Brentford, he was left out entirely against Liverpool. With Chelsea’s Ben Chilwell also out of favour with his club manager, Southgate will have growing concerns about his options at left-back.

The overriding feeling is that game time and performance levels in the coming weeks in the Premier League will be crucial for Manchester United’s England contingent.

The World Cup hopes of Maguire and Shaw are still very much up in the air.

Promising signs for Rashford and Sancho?

Marcus Rashford hasn’t played for England since the Euro 2020 final against Italy, more than 13 months ago. His last international goal was in a friendly against Romania in June last year.

Both men – who missed penalties in the shootout in the Euros final last summer – have been frozen out of England’s recent squads, with a metaphorical mountain to climb to get back into Southgate’s thoughts in time for Qatar.

It is still a race against time for the pair, who will need to consistently maintain the levels they managed against Liverpool throughout the rest of this autumn, for Southgate to be tempted to include them in his World Cup squad.

Rashford and Sancho have started all three games under new Manchester United manager Erik Ten Haag so far this season, and if they continue to get that game time, and maintain the performance levels they showed against Liverpool, Southgate will be sure to take notice.

Nevertheless, they’re competing for places in positions where England are particularly strong. Sancho and Rashford will be up against Phil Foden, Raheem Sterling, Jack Grealish, Bukayo Saka, and Jarrod Bowen as they battle for an England spot.

What’s next for England?

England will convene in September ahead of the two remaining group stage matches in the Nations League.

They face Italy at the San Siro on September 23 before hosting Germany three days later at Wembley.

Southgate will submit a long list of players to FIFA on Friday October 21, but the England manager is expected to announce his final World Cup 23-man squad on either November 9-10. The FIFA deadline is Monday November 14.

England will depart for Qatar on Tuesday November 15 before they face Iran in their opening World Cup group game on November 21 at the Khalifa International Stadium, Doha.