Arsenal are still interested in signing 29-year-old Spain striker Alvaro Morata – who is on loan from Atletico Madrid at Juventus. (Calciomercato, via The Boot Room)

Barcelona midfielder Sergio Busquets, 33, says bringing in Gabon striker Pierre-Emerick Aubameyang, 32, on a free transfer from Arsenal is a “gift”. (Movistar, via Goal)

Houston Dynamo have made an offer to sign Atletico Madrid and Mexico midfielder Hector Herrera, 31. (MLS)

Real Madrid will focus on strengthening their attack in the summer rather than pursuing a squad overhaul which could impact the club’s financial position. (Marca)

Everton could try to sign one of Chelsea’s out-on-loan trio of Billy Gilmour, Conor Gallagher or Armando Broja this summer. Scotland midfielder Gilmour, 20, is at Norwich, England midfielder Gallagher, 22, is at Crystal Palace and Albania striker Broja, 20, is at Southampton. (Givemesport)

Juventus are prepared to offer Argentina forward Paulo Dybala the contract extension that was agreed in October if the 28-year-old’s agent gives up a large amount of the commission he would make on that deal. (Calciomercato, via Football Italia) 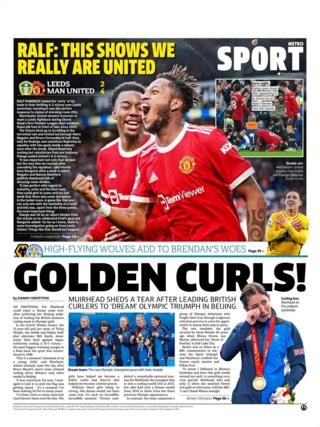